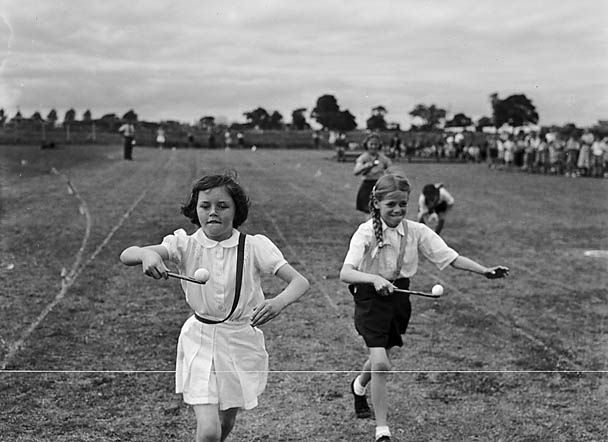 image: Geoff Charles, CC0, via Wikimedia Commons
These sunny days have awakened in me the feeling I used to get as I walked to primary school in the summer – when even at 8.00am it felt great to wear short trousers and a short sleeve shirt. For some reason that memory is a really happy one and I often hope that I might recreate it. This week I have certainly had the same feeling and as I lingered on that memory the other day I then thought of the sports day in my last year of junior school. My schools didn’t go in much for awards or commendations or ceremonies – no prize-givings or head girls and boys. So sports day was probably the one time when gold, silver and bronze were applauded.

On that particular hot sports day, yellow team – of which I was a part – won. Not only that, I won the long distance running race (I’m not sure how long that really was). But annoyingly I missed out on the celebrations because I had to copy out a poem in best handwriting. I had entered a poetry competition which was to write a limerick about the dangers of building sites. The famous at the time limerick writer, Pam Ayres as judge. Frustratingly I didn’t win but I was a runner up and went with my dad to a huge building sit in Wolverhampton as a prize!

I’m glad my schools didn’t put much emphasis on awards – especially academic ones as they can be dispiriting for so many. But there is something good about ceremonies that honour people – who they are, how they live and also what they have done. I have been involved in a couple of thank-you events at our church this week: outside, in the garden, lovely food; safe distance, hand sanitizer and general crowd awareness.

There were no prizes given for best Christian, most accurate prophecy or largest haul of converts. But thanks were given, stories were told, challenges expressed, and a recognition was given that so many people have served sacrificially and kindly over this last difficult year.

One person shared their testimony of being convicted to take faith and discipleship more seriously – to the extent of pursuing a new job and being ready to change all kinds of secure and comfortable aspects of life for the sake of following that call. Interestingly, at the other event this same person was referred to as being incredibly kind and caring in listening and gently leading someone who had just completed a course about gifting. He expressed delight and surprise about how she had brought out awareness and clarity in his own thinking.

Sometimes giving honour is very private like this. It is not done in front of people and the person who is being lauded doesn’t even know. But the giving of honour is incredibly powerful. Saying thank you with food and drinks, telling stories, eye to eye contact – and in these corona times, simply being in relative proximity, are all ways of experiencing the giving and receiving of appreciation. Medals aren’t needed and it is not about selecting people who are better than others, but these rituals of honour are rich and meaningful.

Now there is in store for me the crown of righteousness, which the Lord, the righteous Judge, will award to me on that day —and not only to me, but also to all who have longed for his appearing.
2 Tim 4:8