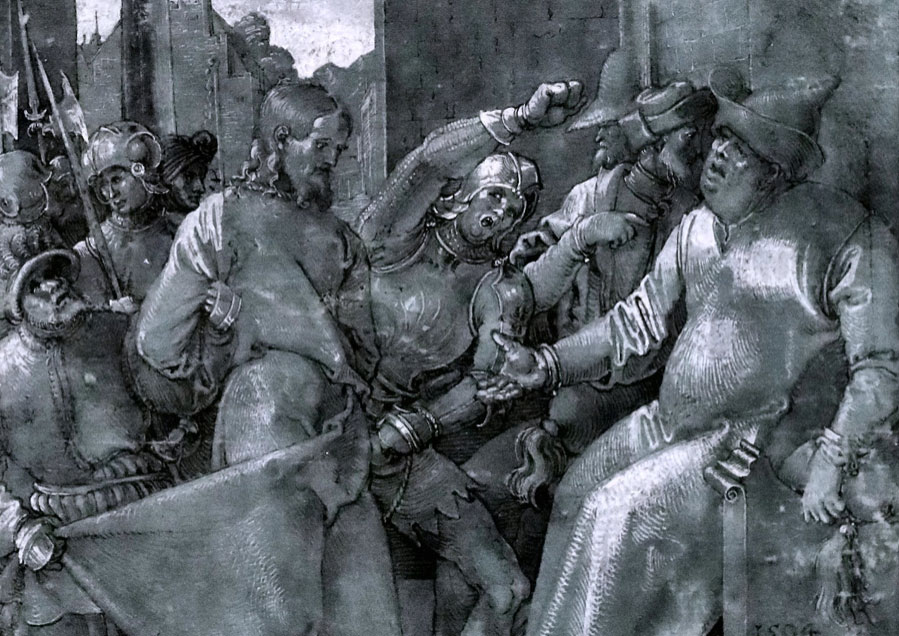 In chapter 11:
9 Those who went ahead and those who followed shouted,
“Hosanna!”
“Blessed is he who comes in the name of the Lord!”
10 “Blessed is the coming kingdom of our father David!”
“Hosanna in the highest heaven!”

And in chapter 15:
9 “Would you like me to release to you this ‘King of the Jews’?” Pilate asked. 10 (For he realized by now that the leading priests had arrested Jesus out of envy.) 11 But at this point the leading priests stirred up the crowd to demand the release of Barabbas instead of Jesus. 12 Pilate asked them, “Then what should I do with this man you call the king of the Jews?”
13 They shouted back, “Crucify him!”
14 “Why?” Pilate demanded. “What crime has he committed?”
But the mob roared even louder, “Crucify him!”

There are scholars who point out that the crowds who hailed Jesus’ entry into Jerusalem on Palm Sunday are not necessarily the same crowds baying for Jesus’ blood on Good Friday, but if we have read the story, most of us are aware of the sharp change of mood and turn of events in such a short time; Jesus goes from hero messiah to common criminal.

When I read these passages, I would hope that I would not be one who is so fickle – surely I wouldn’t feel so let down by him as my hopes of a victory over the Roman occupying forces were dashed by his humble and love-focused leadership? But at the weekend I saw in my own heart the ease of the switch from euphoric England football supporter to disappointed, upset, and knows-far-better critic. We have seen the rapid change from the delight at reaching a semi-final – and winning at half time in the final – to a sense of disgust and shame that makes the very same heroes on the field now common criminals on the sidelines. And not only that quick change of mood, but also some really vile abuse hurled at previously venerated saints of soccer.

This is the same spirit that was around 2000 years ago. It is the spirit of Anti-Christ – which hurls deep-down personal shame and failure as a weapon at those who should really be given grace and honour. This spirit resides to some extent in each of us. When hopes are dashed, we often need to externalise our frustration and find someone to blame – a scapegoat - which in itself is a biblical-image of vicarious sin and judgement. For most of us it comes out in cutting remarks, sarcasm, moodiness, and a temporary inability to connect well with others around us. But add in nationalism, alcohol, mob-cohesion and 18 months of covid incarceration and this small bottled-up genie explodes into demonic violence and racism.

It has made me aware of how I should handle my fragile hopes and fears; what I project onto others; whether that’s the not-yet-sir-after-all Gareth Southgate or those who are closest to me or influential in my everyday life. I may be frustrated at the dishwasher not being loaded, the roadworks looking like they’ve been badly planned, the dog digging up the lawn, or my own lack of attention and care for others.

So I thank God for a lovely meal with my family, for a country that has councils that sort our roads out, for a dog that greets me with a sloppy kiss and even for the privilege of having people to care about.

What is worthy of praise in the Euros? A football team that did so very well, especially players who are incredibly young and yet so well able to manage themselves and their skill in such a public place; sage comments and attitude from their manager; a chance for anyone in England to appreciate the Kingdom of Heaven nature of sport ; the essence of play, which is in the heart of God.

What would have happened if the crowds had managed their disappointment and frustration when confronted by Pilate? They would have remembered the healings and the miracles, the teaching, and the love. They would have clung on to what they had experienced and also made some room in their hearts for the promises of Jesus for their future.

So, let’s be generous to all those players and their manager, thankful for what they have given. The way to address the spirit of anti-christ is to live, move and speak in the Holy Spirit of Christ. Let’s be generous to those who are closest to us and to those who impact us with their decisions. And let’s bring before God our disappointment and dashed hopes – to be acknowledged and washed, healed and redeemed, so that we can put into practice all the good stuff and allow the God of peace to be with us.