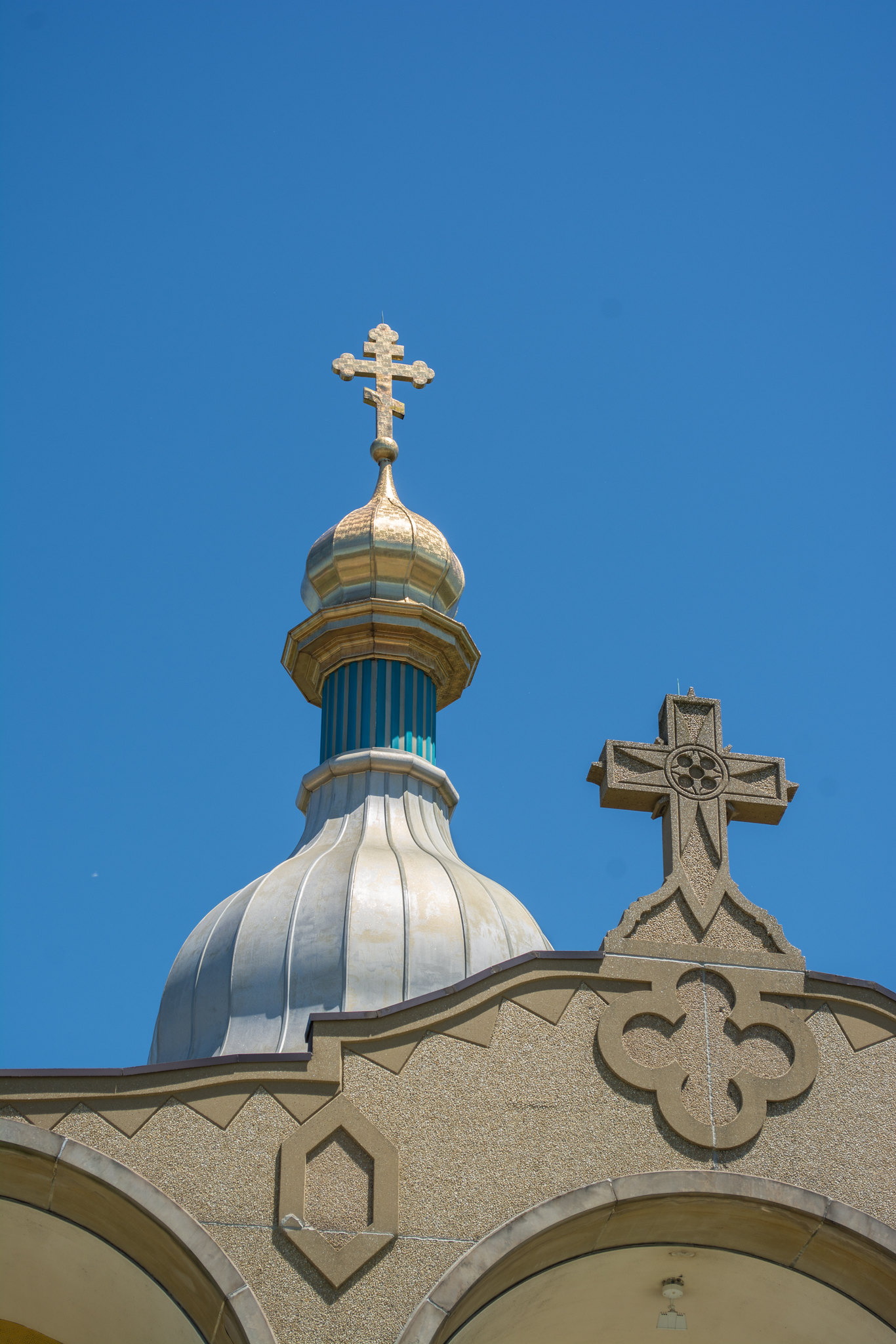 Image: St Vladimir’s Ukrainian Orthodox Cathedral. Tim Evanson on Flickr
“You saw, O king, and behold, a great image. This image, mighty and of exceeding brightness, stood before you, and its appearance was frightening. The head of this image was of fine gold, its chest and arms of silver, its middle and thighs of bronze, its legs of iron, its feet partly of iron and partly of clay. As you looked, a stone was cut out by no human hand, and it struck the image on its feet of iron and clay, and broke them in pieces. Then the iron, the clay, the bronze, the silver, and the gold, all together were broken in pieces, and became like the chaff of the summer threshing floors; and the wind carried them away, so that not a trace of them could be found. But the stone that struck the image became a great mountain and filled the whole earth. This was the dream. Now we will tell the king its interpretation…”
Daniel 2:31-36

This is Daniel, telling King Nebuchadnezzar, one of the most powerful rulers of the world in his day, his dream, and then going on to give an interpretation. The book of Daniel has a number of dreams and visions that are about world politics and heavenly battles. The images in the visions are terrifying and violent. They describe, in poetic form, what happens when spiritual forces and human bings work together to force the world into submission to their rule. Although it is bizarre and confusing, in some ways it is not as bizarre and confusing as the events that we see around us or read in history. In fact, the very nature of these psychotropic style images points to the fact that world violence is not reasonable, understandable and simply part of normality, but is a strange, chaotic version of the just and right way of living that is imprinted into our humanity by God the creator.

Nevertheless, when we watch what is unfolding in Ukraine - and also dig deeper to follow happenings in Yemen or Syria and other parts of the world - there are some more understandable threads in contemporary politics, recent history and also ancient history that reveal to us some of the reason why certain parties are aggressive and others take up arms. Daniel predicted some of the geo-political movements that would take place in the following 400 years across Europe, North Africa, the Middle East and Western Asia. The result in Palestine in Jesus’ day was an occupying force, continued suspicion and aggression between north and south of the country, long memories of previous wars, and those who worked for compromise and even the chance of a bit of power and prosperity if they played their cards right. Jesus could see these various positions, and in both his divinity and humanity, the reasons why his homeland had ended up like it was. Daniel predicted that Jesus would start a new Kingdom - a stone thrown from heaven, like one of the young King David’s tossed at Goliath, that would eventually bring down all other kingdoms.

In the meantime, it is helpful to watch and listen to what is happening now and to dig that bit deeper to see some of the past struggles and yearnings - whether that is since 1989, from the Soviet era, the early 20th century and even from a thousand years ago. I read a helpful piece by Stefania Knecht, the wife of one of my theology lecturers, which gives some insight into Ukrainian history. https://blogos.wp.st-andrews.ac.uk. Her husband, Jasper, has expertise in church history. A few weeks ago I listened to him lecture on the debate between the Eastern and Western church over the nature of sending of the Holy Spirit within the trinity. This is relevant to our understanding of current conflict in Eastern Europe even though it happened a thousand years ago: look up the Filioque debate. Also other aspects of the conversion of rulers in that region around that time shed light on deep rifts, anger and disappointment that remain in the psyche of people and places even today. Further helpful short writings on this are from James Emery White:

All this to say that there are dark forces at work - the kind that Daniel sees and interprets - that take our human weakness and turn it into rebellion against God. The politics and economics are vast and intricate. I heard even yesterday that Germany’s foreign policy is changing for the first time in 30 years. And today Nazanin Zaghari-Ratcliffe has been released. Epoch-changing moments. Everything builds upon everything else - gold, solver, bronze, iron and clay. What can we do in the face of such giants? In our church we generally turn towards Pray, Give, Act. All of these, all of us can do. Prayer is what Daniel got into - even as a powerful politician. 24-7 prayer have some very helpful resources to guide us to pray for Ukraine. Find a way to give. There are some great organisations that are raising and channeling funds. Our church has found one that is big enough to manage and distribute these but also is able to get the to where they need to be. And find an Action. Look on the government website where it is now possible to indicate that you can house a refugee. Stage 1 of this is for those from Ukraine who we may know, but the next stage will probably mean that we can look after people who are allocated to us. And there are organisations like sanctuary foundation that are bringing Christians together to pray, give and act in an informed way.

Daniel 7:27 - describes where the Kingdom of Jesus, starting as a small stone in Palestine 2000 years ago, will surely take us -

‘And the kingdom and the dominion
and the greatness of the kingdoms under the whole heaven
shall be given to the people of the saints of the Most High;
his kingdom shall be an everlasting kingdom,
and all dominions shall serve and obey him.’
BUY THIS IS THAT
HOMEWRITERSPEAKER AND MENTORBLOGBOOK MARTINSUPPORT MARTINABOUT MARTIN YOUNGTHIS IS THAT PRODUCTIONS (Coming Soon)REGISTER FOR UPDATESPRIVACY POLICYSHOPPING CARTBUY THE BOOK
God-Pointing: John 3: 1-2
Web Design by Press Creative Ltd