HOW TO LIVE AND SPEAK 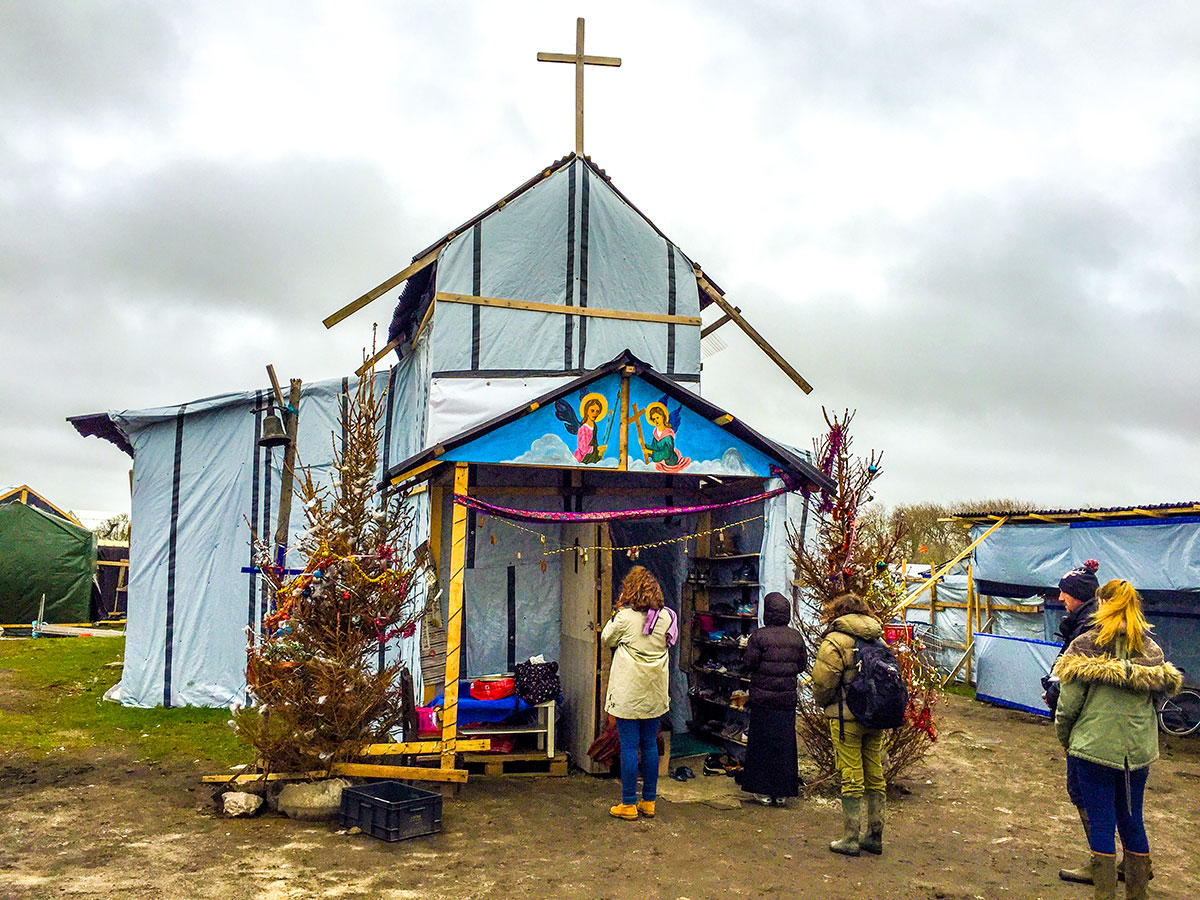 Image from upload.wikimedia.org: St Michaels Church, Calais Jungle
I was in a discussion last night about the church’s position, voice, role or even rights within the laws and approaches of government during lockdown. Some people have been saying that the church is being sidelined or even persecuted by not being able to gather to worship and sing. Others say that the offer of the church fulfils a need that is not met elsewhere and therefore needs more exceptions made. There are competing voices asking why churches could not open when pubs could, but also why churches have opened to an extent, but theatres have not. There are police called to baptism services and worship road tours protesting against not being allowed to sing.

Within these various discussions are opinions about government and its role – even some serious allegations that the whole thing is a conspiracy, or at least governments and corporations are exercising overweening control. There are also concerns about what is important and in what order – reducing virus transmission so that the vulnerable are protected; stimulating the economy and keeping people in work; providing space for spiritual and mental health. These are all really important aims but in our current context they are competing with one another.

All this has made me think about the church’s role in society – our own in the UK and also others. If the church has a legitimate place, a platform and even institutional power (even if that is on the wane) then it will approach its mission in a certain way. If it is not recognised, banned, or tolerated but with little official influence, then it will approach its mission in a different way. The mission, however, remains the same – to live out and to speak out the Kingdom of Heaven.

Living it out is more about how we form community through our prayer and worship life and our care for one another, than it is about holding worship services on a weekly basis. And this living it out is also about caring for those not in the church. We look for people to care for so they can experience Gods love through us and also bring them in to our own experience of God in worship and prayer. They too, can experience him and his wonderful presence. I have been aware that although churches have not been ‘open’, this does not stop them from doing this. It makes the gathered worship and prayer more difficult to host, and it is harder to invite others into that experience, but the visible and tangible community of the saints can easily and powerfully happen between Sundays and not just on Sundays.

Speaking it out is about our prophetic proclamation. That sounds quite grand but begins in how we speak life to those around us and in doing so bring the creative power of God that releases painful thoughts, emotions, relationships and even bodies. It then resounds further out and addresses injustices, sin and powers that are raised up against the knowledge of God. Therefore, there is a place for the church – informally or formally as it is seen and known by individuals and governments – to speak the gospel of the Kingdom of Heaven, however uncomfortable or challenging that may be. John the Baptist spoke out about oppressive religion and culture and then also spoke out about a ruler’s own personal behaviour. He was imprisoned and beheaded. Jesus stood in front of the Roman ruler, quietly and strongly, but in that he challenged even Caesar’s authority by acknowledging himself, as the Christ as the Lord. He was crucified.

The early church had no official power – in fact it was hounded and chased and persecuted in many places. But it lived out its mission in such a way that people joined in – even if the places it gathered were not as public or accessible as they would have liked. The church brought healing and reformation to families and communities. In some places this reformation ruined local economies and in others it challenged the assumed norms of behaviour, morality and ethics. This has then happened throughout history. It has been accompanied by proclamation. Paul made speeches that either intrigued people or angered them. The historical church has raised up agitators whose words got them into trouble because of the offence and challenge they brought – even within what was seen as a Christian society in Western Europe.

Part of our challenge in our own ‘post Christendom’ context, is to determine how we continue to influence society. The proclamation of the gospel is not primarily about the rights of the church in a particular place, but about the dignity and care of all humans, and indeed of creation. The way that Christians are treated is part of that – as is the way that people of other faiths are treated. The awareness we have of spiritual needs as well as economic ones is important to proclaim. The strongly beautiful truths and graces that we understand in the bible are stunningly powerful when expressed and articulated. Our challenge as the church is to know how to live and how to speak, so that our voice is truly prophetic and our actions bring the heavenly power of God into our world. We need to pray for wisdom and boldness, laying down our lives, emptying ourselves of earthly power, in order to see greater transformation among people and places. The photo above is of a church within what was the Calais Jungle – an offer of hope and faith in the midst of desperation. Here is Paul’s advice at the end of his letter to the Colossians:

Devote yourselves to prayer, being watchful and thankful. And pray for us, too, that God may open a door for our message, so that we may proclaim the mystery of Christ, for which I am in chains. Pray that I may proclaim it clearly, as I should. Be wise in the way you act toward outsiders; make the most of every opportunity. Let your conversation be always full of grace, seasoned with salt, so that you may know how to answer everyone.