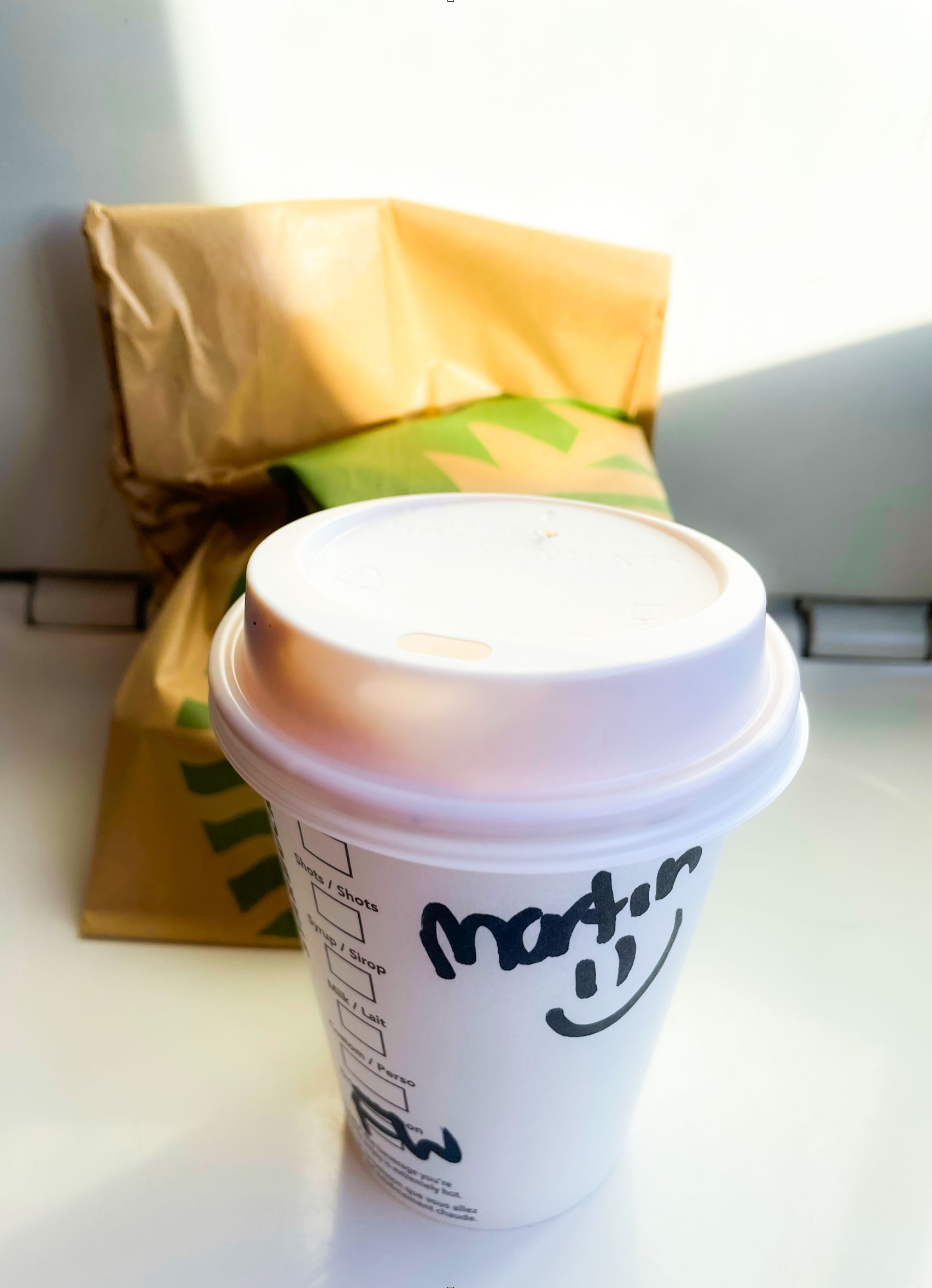 Image: A coffee for Martin
I am writing this on a train to London. It’s quite novel to be on a train like this, after a long time sitting in my living room where the furthest I travelled was to the kettle in the kitchen. In a conversation earlier this week I talked about the fact I had missed this kind of journey, as I find them great times to reflect and reenergise.

There is something about being trapped in a seat or forced to queue and experience the limbo of a waiting lounge, that constrains me in a helpful way. Maybe I am easily distracted, so find it hard to settle and centre in the usual familiar spaces; or having the possibility to act and do things brings with it an unhelpful pressure to be active rather than to be still. Being in a train, or bus, or plane, or car, means that there’s not a lot else to get on with. No tidying up, no little jobs to just be fitted in, no frenetic activity to assuage guilt at previously unproductive inactivities.

During the periods of lockdowns over the last 18 months I certainly deepened and strengthened my habit of daily prayer and bible reading. That was so helpful. I’d like to think I made a strong decision to delve deeper into holiness but some of it was forced on me by being banished to the living room for a few weeks to avoid sickness, then waking up very early because there are no curtains in there, and not having anything else to do while everyone else was asleep in the house. However, I missed these kind of travelling times. Over the years I have adopted travel in a car or train and even the interminable waiting and queuing at airports, as important times of retreat and connection between my own heart and mind and the Spirit of God. I have come to rely on such withdrawals, and the pattern they have formed in me has been healthy and life giving; to the extent that I would often chat to God about what I wanted to chat to him about on my next journey! (Why not just get it all done there and then I hear you cry! Yes that would be sensible but I’ve not reached that level of clever maturity yet)

Jesus, of course, had lots of withdrawal times. And I wonder if his walking, pausing, breaking-off-activities intentionally enabled these times of reflection and recuperation. The crowds did not stop coming to him - so if he’d built a big stadium it would have been full and busy every single day. Also the model of Jesus does not force on us either an extrovert or introvert pattern. Withdrawals are not just for those who get their energy from being alone. One of the aspects of Jesus withdrawing was the encounters he had with people that he might otherwise have missed. At the well, he chatted to a woman rather than gazed into his own soul, and was obviously energised by the conversation. So a retreat - whether incidental or planned - is not a personality thing, it is about changing the usual rhythms and activities in order to be both newly settled and surprised by the comfort and inspiration of the Holy Spirit.

I am privileged enough to have just started a sabbatical. This is about re-centering - away from the usual ingrained pattern or even addiction of activities in order to be open to the prophetic voice of God. And then to gain strength, imagination and resource in order to lead more effectively and freely. But whether or not these retreats are daily moments of regular resetting, occasional but frequent times of creative recuperation, or extended and planned periods of soul tidying and restoration, forcing ourselves to not be at the mercy of daily demands is really helpful. So, if you can, hop on a bus, go for a walk, book a room at church, stand in a long queue, treat yourself to a coffee and breakfast roll, arrange to meet a friend, grab your bible, switch off your phone, make a cake; whatever it takes to carve out space and time to meet with God, face to face, as a person meets with their friend.

And that’s my journey nearly done now! At 724 words I’m coming in to Euston. Writing helped me to consider all this. I drank my coffee. I thought about the meetings I am about to have. I reflected on a line from a psalm I read this morning. I emailed a mentor. And I grew in anticipation of the meal I’m having with my son this evening at the appropriately named restaurant, St John Bread and Wine. Even if Jesus didn’t write a blog, surely his withdrawals included eating at places like that!