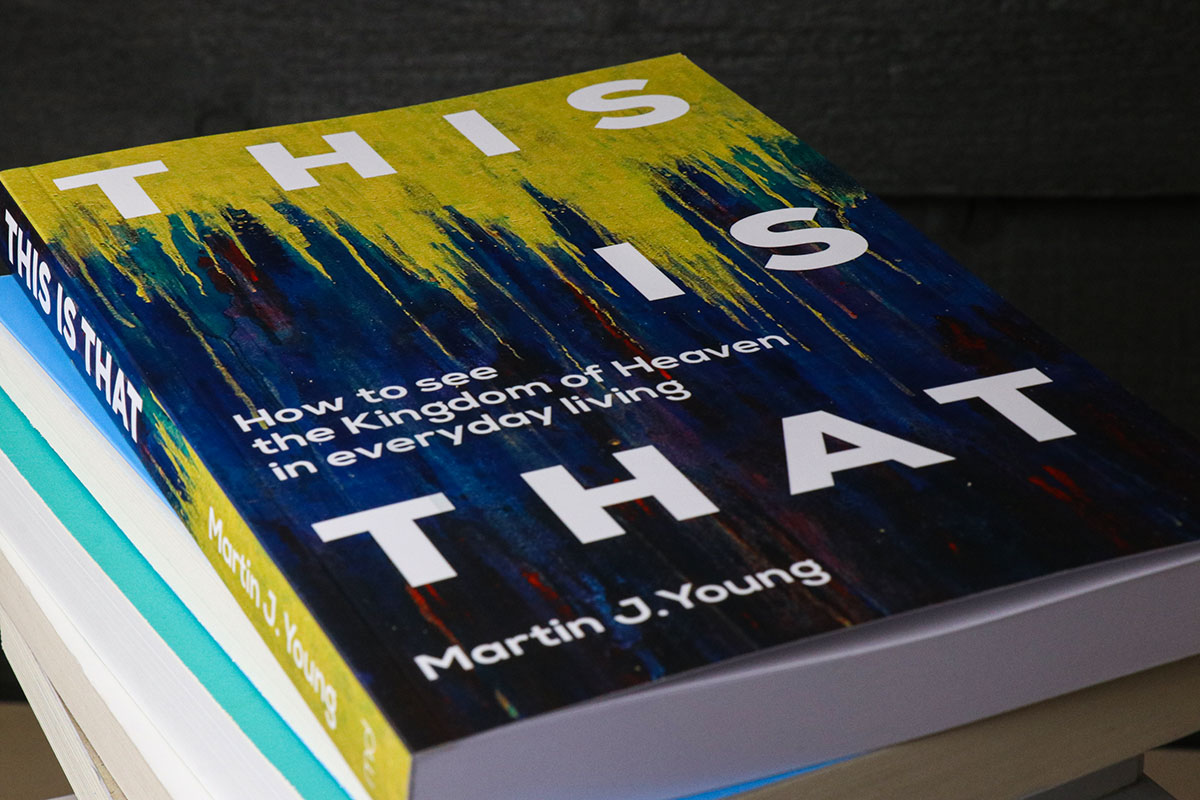 This is That by Martin J Young
So, there’s a new book out. Years in the writing. Blood, sweat and tears.

“This is that” is the phrase that the apostle Peter used on the Day of Pentecost when he was explaining the new age of the Holy Spirit breaking through in that upper room in Jerusalem. This is that which the prophet Joel spoke about.

I’ve been interested in the Kingdom of Heaven for years so I decided a few years ago to express those thoughts and talks in a book – and finally it is finished!

The thing about the Kingdom of Heaven is that although Jesus said it is here, it is in you, among you, it has come and it is coming, we don’t often see it or understand it. It offends us and trips us up. Or appears too hard or too simple. It is what we have always longed for, but other compulsions push it to the sidelines.

Jesus taught and demonstrated the Kingdom of Heaven and his good news gospel was the gospel “of the Kingdom of Heaven”. So it makes sense for us to think about it, look for it in the bible, search out its treasures and then learn to live in its culture. And, like Peter – or Paul in Athens – work out ways to point towards it so that others can live in its goodness too.

That’s what the book is about. How God’s plan for humanity and creation was always the Kingdom of Heaven that Jesus then lived out for us. I read an article this morning co-authored by theologian Miroslav Wolf, titled ‘What is the meaning of life?’ This is his introduction:

When asking a question about Christianity, the best rule of thumb is to start with Jesus, so that’s what we’ll do. Now, when Jesus talked about the kind of life that is truly worth wanting, the kind of world truly worth hoping for, the sort of existence that we could truly describe a flourishing, he tended to talk about 'the kingdom of God.' He didn’t mean a particular territory that is God’s in the same way that the United Kingdom could be said to be Elizabeth II’s. Instead, “kingdom of God” names creaturely (meaning part of the creation or created world)—and most especially human—life as God intends it to be.

So that’s a serious candidate for a Christian answer to the question of the meaning of life: 'the kingdom of God.' But this isn’t a totally satisfying answer. It’s still pretty abstract. What does it actually look like? How does it cash out?"

I hope that the book ‘This is That’ continues this conversation in a way that intrigues, points, uncovers, reframes and makes helpful sense. Kingdom of Heaven life is fleshed out in the term Shalom in the Old Testament. It is lived out, within a corrupt and broken reality, by Jesus where there are forces against the Kingdom and ways of resisting and overcoming these forces so that even in our sin-ridden here and now the Kingdom can be enjoyed. It is explained by Jesus’ parables – story arcs that bypass, undermine or completely turn over our assumptions of the good life and help us to find the child-like, humble and light-stepped way in. It is described in terms of a garden, tabernacle, temple and city – not as religion but as pictures of our relationship with each other, with the earth and with God – and those who are architects of this Kingdom-building in terms of prophets, priests and kings.

But in reality the Kingdom of Heaven is not a religious construct or only relevant in a theological discussion. It is the life that God has always wanted for us. And it is tasted in the afternoon cup of tea, the tender care towards an elderly relative, the tidying of the house, the baking of the bread, the exhilaration of the snowboard, the beauty of the equation, the slow chug of the canal boat, the miracle of healing, the giving away of what is precious, the casting out of the demon, the rise of hope in quiet prayer, the intimate holding of a friend’s hand, the laughter filled selfie and both the first and final breaths of the made-in-the-image-of-God human being. Look for it, embrace it, learn it, give everything up for it – it not only starts in the here and now but is growing and perfecting and will never be overcome.

I hope you enjoy the read.

I was interviewed about the book here.